I wasn’t going to get all into the eclipse like most of the country, I’m glad I did a little. We didn’t travel to see it. We just stayed home. We didn’t get the glasses. 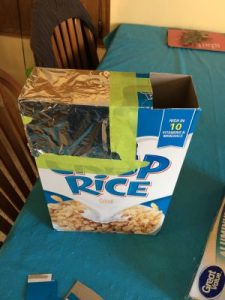 I looked up on the NASA website about how to make a pin hole viewer.

I used a cereal box and some tin foil and tape.

My friend who lives next door came over and we made a few more for her kids too.

They are goofy looking but they worked.

If you looked in the top end you could see the tiny little dot that was the sun.

We stood outside looking in our boxes when her son said the library was giving out glasses down at the park. He took off on his bike and came back with one pair.

I tried to take a picture with my IPhone and the eclipse glasses. It didn’t really work.

Pretty soon most of the block was outside and came over to see what we were doing. We were passing around glasses and boxes talking about how we remember seeing the one when we were kids.

It got chilly and a little dark, but not much more than when the wildfires had filled the air with smoke.

My son loved it. He was so excited about the eclipse. Autism didn’t get in the way this time. He looked in boxes and used the glasses just like the rest of us. He was great and didn’t even throw a fit when it was over. 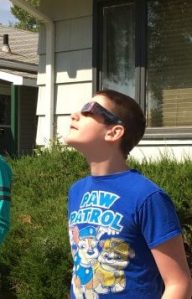 We got to goofing around and tried the “finger waffle” method of seeing the eclipse. It didn’t work too badly. 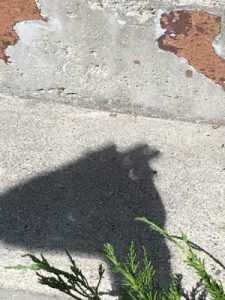 We were really lucky to have completely clear skies to see the eclipse. Unlike my poor hubby, who is in Salina, Kansas right now. He only got a short glimpse because of the clouds.

After is was all over, we came inside and watched the coverage on tv. It was cool to see all the people coming together across the entire nation in wonder for something like this. If you’ll forgive the pun, this event has eclipsed the strife that has been so prevalent in our nation for too long. It is a good reminder that we can be one people after all.

Donkey Basketball. Sounds funny doesn’t it? Well, it is. It is a game involving players riding donkeys up and down a basketball court trying to get the ball in the hoop while staying on the donkey. There is no dribbling but there is passing to other teammates. If the ball goes awry then the player must get off their donkey and chase down the ball and throw it to another player then get back on their donkey.  The donkey’s wear little rubber shoes to protect them and the floor of the gym. It isn’t a fast paced game, but it is fun.

The Shelby FFA kids were having a fundraiser by way of playing Donkey Basketball. They asked the Conrad FFA group to bring a team to help out. My daughter volunteered without a second thought. Her and a couple of other kids rounded up enough members for the team. They donned fake mustaches and little sombreros and called themselves the Caballos diablos. Incidentally the team was all girls with one guy. Most of them had never been on a donkey, but they had ridden horses. It was an eyeopening experience.

When they arrived they found out they would be playing against the three time running champions- the firefighters. They were very intimidated but unbelievably enough the kids won! The Shelby FFA kids were playing against the Shelby Faculty. That match was a comedy of errors because it seemed the kids weren’t quite ready for their teachers to be so game. The final match was the Shelby FFA against the Conrad FFA. Nothing like friendly competition! Was more like a free for all and the donkeys were winning.

There have been a lot of articles about the cruelty of donkey basketball. They say it violates the donkey’s rights and subjects them to frightening circumstances. I can’t say if that is true in other places but here in Montana, it wasn’t true at all. As a matter of fact, we live with an abundance of animals here in Montana and everyone is brought up to treat them right. 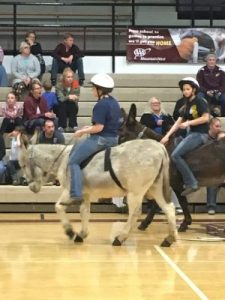 The donkeys were subjected to lots of petting during half-time, but beyond that they were treated great.

From the looks of the games, it was the donkeys that were in charge of things. Most of the time they were meandering where ever they felt like regardless of what the riders wanted and in wonderful Montana fashion, the riders just laughed and let them go where they would.  My poor daughter had picked a very sleepy donkey that spent most of its time visiting with the audience and getting its ears scratched. She even ended up in the corner at one point because the donkey decided that he was done.

All in all it was a wonderful night and my daughter said that she was glad she did it and wouldn’t have missed it for the world. The FFA raised a lot of money for the food drive and everyone went home smiling, even the donkeys.

Took a trip to the circus with the family this past weekend. Yes, I know there is big stink going on about the treatment of animals at circuses etc, but this circus wasn’t like that. My son had been asking about going to the circus for a while now and I happened to hear on the radio that the Shriner’s were going to be bringing a circus to Great Falls. SO off we went.

It was a wonderful circus. It was clean and all sparkly. Nothing was chipped and worn. All the workers wore matching uniforms and were all very friendly and nice. As for acts… they had it all. Dancing girls who went on to do a variety of acrobatics. Jugglers. Motorcycle riders zipping around inside of a big iron ball. Gravity defying acrobats that ran up and down poles like they were lying flat. They also had a group of acrobats that did all their amazing tricks balanced on the shoulders of one man, including riding a bicycle in a circle inside of a wheel. My hat’s off to that lady she made it look so easy! 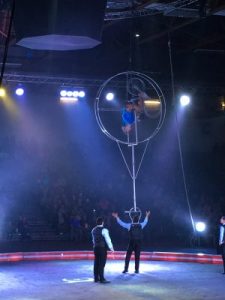 They had six Bengal tigers, three white and three brown. They were rather playful tigers. One kept batting at the trainer’s stick like a kitten. And before you complain about abuse, let me say that these tigers were very healthy. Their coats were shiny and they were alert and active. The trainer was even giving one a hug and scratching its chest and the tiger was snuggling into him loving it. 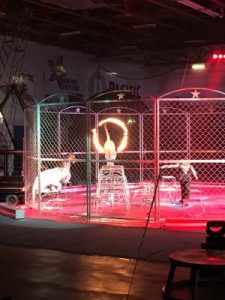 They had an archer that was quite amazing and left me rather unsettled as he shot arrows at his assistant’s head.  They also had kids rides on ponies, a camel, and an elephant. Once again the animals were happy. The elephant trainer never once touched his elephant with the stick and the elephant just wandered where it was supposed to. All he had to do was speak to them and they did what he asked. The camel was a bit cheeky. He was being rather stubborn and didn’t want to move without a treat first. His trainer called him a brat and  he just opened his mouth for his treat. Which he got lol.

Then of course the show ended with a bang, literally! A human cannon ball. My son was scared at first by the noise but now all he can talk about is how he wants to be shot out of a cannon.

All in all it was a great day. Whole family got to spend the day together and my son didn’t have a massive meltdown when it was done, but just a little one. I call that a win.

Here I was trying to get something done, when I notice I had a helper. I could have been done in half the time if she’d have said something earlier! 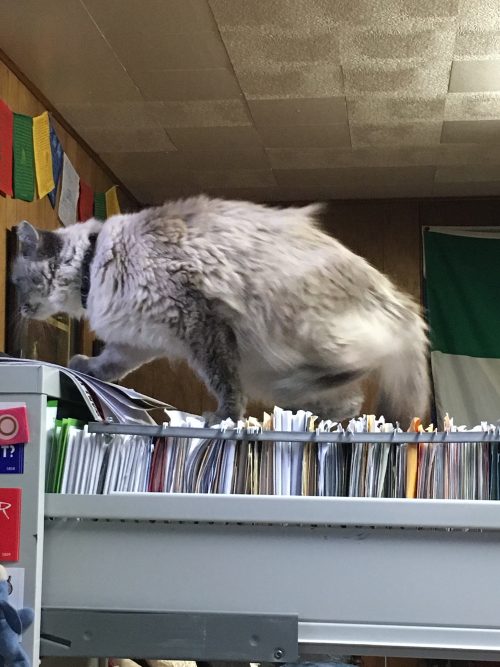 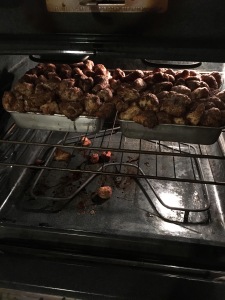 It is basically flavored bread that comes apart in chunks. There are a million versions of pull apart bread. Some are savory and some are sweet. In my family it is always sweet. As a child I never understood why we called it Coffee Cake because there was no coffee in it, but now I understand that it is because you have it with your coffee.

The recipe is simple.

Seems like an easy thing to make, and it is. Unless you’re me.

I thought it would be nice to make it and have it ready for breakfast in the morning, but I didn’t take into account that I was tired and my day had gone badly already. (By the way this combination always curses any attempt at baking.) I had already thawed out the bread dough and was committed to making it regardless of the imminent doom I knew was coming.

I started it after dinner. I cut the dough into chunks and melted the butter. Normally we use a fluted pan but I have had success with just using small 8 x 8 pans. So I used the small pans. I was zipping through the pile of dough filling the pans easily. No problems so far. I had divided the dough between two pans. Once they were full, I set them aside and covered them so they could rise.

In the meantime, I started my son on his nighttime routine. While he was in the bath I checked the pans and they looked ready for baking. I slid them in the oven and went back to check on my son. I had it all timed so that the bread would be done before he was ready for bed. Or so I thought.

For some reason the bread dough went through a growth spurt while in the oven, but only the outside edges. The middle stayed where it was but the outside overflowed and started dropping like doughy rain onto the bottom of the oven. Smoke started to fill the house as the sugar coating caught fire.

I turned on the extractor fan above the stove and opened the oven. Using a silicon ended tongs I removed the charred chunks of bread. They were like black rocks. I could have used them as sling shot ammo. I checked the bread and the outside was done. Nice hollow sound when I tapped on it. I thought they were done. Hahahaha, no.

The inside was completely doughy. This had never happened before. I wasn’t sure what to do. I couldn’t very well tear it apart and cook the inside as the outside. I took a cookie sheet and flipped the pans upside down on the trays. I figured it they were going to cook weird then I might as well go all out. Another 20 minutes and another round of smoke from the bits of butter and sugar that had already fallen filled the house. I opened the window too this time although that is not the greatest idea during winter in Montana. However, the bread was finally not raw on the inside.

It wasn’t pretty but it was edible. It actually tasted amazing. So even though I totally failed, I succeeded because it’s not the looks its the taste that’s important.