I always tell my children not to lie. It is a good thing for them to know and live by. I try my hardest not to lie. It’s not easy. Sometimes it is the hardest thing in the world, but I believe in telling the truth.

But this morning as I was walking my 11 year old autistic son to school, I realized that I was lying to him. 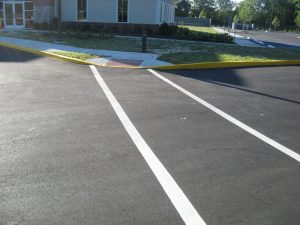 I said to him, “Say in between the lines of the crosswalk. That’s where it is safe to cross.”

This is true according to traffic laws. That is why the crosswalk is there, to give a safe place to cross the street.

Then I continued, “It’s like a bridge, you wouldn’t cross a river without a bridge, so don’t cross the street without a crosswalk.”

At that moment, I realized the lie.

The road is no different inside the lines of the crosswalk than outside of it. It is merely lines painted on the pavement. It’s not safe. There is no magic barrier there that will keep him from getting run over. (That thought alone scared the Hell out of me.) It’s just lines.

The only reason that it is safer to cross at the crosswalk is the teaching we get in driver’s ed. The traffic rules that tell us to look for pedestrians in the crosswalks. That doesn’t mean that drivers will, just that they are supposed to.

So in lying to my son I gave him a false impression of the world, but it is a lie that has to be told. The belief that a crosswalk is safe is the only thing standing between me and a child in a coffin. If, in his mind, he believes that the crosswalk is safe then he will be forced to live within that stricture. He will cross at the crosswalk making his life safer than it was before.  It won’t keep him from getting hit, but it will up his chances of staying safe.

It is a lie that has to be told. Ignorance often keeps us safe. If you don’t know you can be killed then you don’t panic about it.

When it comes to Autism, one must be very careful with the ideas that one presents. It comes down to control. Often my son just does what he wants because he has no idea what will happen to him. So I must tell him a truth that is a lie to keep him safe.

I tell him all the time, Big House is safe. (Big House is what he calls our home. I don’t know why, he just does.) Big House is safe from thunderstorms, wind, rain, loud trucks, trains and all manner of other things that he is scared of.

I know for a fact that wind can destroy houses. (I lived in tornado land for a long time.) I know that fire from lightening could burn down our house, we could be flooded, or even have a truck drive through our front door. But when it comes down to it, Big House is safe because it has to be.

It’s another lie that is the truth. If I didn’t tell him this lie then he would never sleep at night and he would be in a perpetual state of panic. How can anyone live like that? We tell ourselves these lies so that we can face living. Not just the parents of Autistic children but everyone.

To Quote Men in Black: There’s always an alien battle cruiser, or a Corellian death ray, or an intergalactic plague intended to wipe out life on this miserable little planet. The only way these people can get on with their happy lives is that they DO NOT KNOW ABOUT IT!

So in the end the question comes up: Do I lie? The answer is: Only when it is the truth.

2 thoughts on “The Lies that are the Truth”