People are always saying to me that I should take my son places and get out and see some of the fun stuff around us. Well, that requires travel.

First you have the packing. 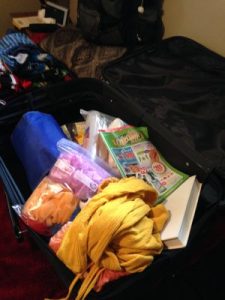 Whatever you try to pack or organize it gets a little askew as they try to help. Sometime you even end up missing things because you thought you packed them and he moved them when he was trying to be helpful. Then there is all the extra stuff you have to take along because he can’t sleep at night without it. Like his pillow, his stuffed animals and the little plastic Smee characters (from Peter Pan) that he has to hold while falling asleep, there is also the music he has to listen to all night and the book you read to him until he sleeps. Thinking about it now I should have added his night light but, ah well.   That’s just the list for bedtime.

There’s also his tablet, the ear protection in case it thunders (he’s terrified of storms), the extra pairs of clothes in case of accidents and snack in case of anger episodes to get him back on track.  Hats, sunscreen, toys, and all the regular stuff you pack for a trip like clothes and toiletries.

And that’s just his stuff.

By the time you are ready to leave half the house is packed and I packed sparingly.

But it isn’t just the bring of extra stuff that makes travel with an autistic child hard. It’s the upset to the routine. Most kids that I know that are on the spectrum need routine. Mine certainly does.

For example if you are driving then you need to stop for food at the right times. If you go to long or eat too soon after the last time they get grumpy. Sitting in the care too long makes them grumpy, they need to move around a lot more than the seat belt will allow. If they get grumpy there is the possibility of a meltdown and that is not easy to handle when you are driving down the interstate. Mine will kick the windows or grab my shirt and try to yank me into the back seat. There has also been instances of kicking and pinching. I even got hit in the head with a half-full water bottle once while I was driving. Not the best thing at high speeds.

Another issue is the strangeness of where you stop. I have taken to driving straight through to my mom’s house from Montana. It’s about a 15 hour trip. It’s exhausting and it makes him grumpy but stopping overnight in a hotel is even worse. The last time we were in a hotel he freaked out completely. He was scared of the lights outside the window and spent the whole night trying to get out the door. Well obviously I couldn’t just let him leave. Where could he go? So we fought all night. He screamed and cried. By morning my arms and neck were scratched and bloody and covered in bruises. I took to sitting in front of the door so he couldn’t open it. When he finally did sleep it was about two hours before we had to leave again. So now we drive straight through.

Then once you get where you are going you have to get him settled and that often takes a long time. Luckily we only go to Grandma’s so he’s familiar with it. After trying to keep the routine while you are there, which can get really difficult, you must then make the trek back home again which involves going through all that craziness again. By the time you get home you want to hide and cry but you have to keep going and get unpacked and settled and try to force your reality into some sort of normality.

I know that he needs to be out and see the world but sometimes it is way to hard when you are alone. There have been times when we have gone as a family. My daughter and sometimes my husband are along and that makes it a little easier. Ish. When my daughter is in the back and he is having a meltdown it becomes dangerous for her because he will attack whomever he can reach. So I usually take the seat beside him so he can take it out on me and not my daughter. It is not an easy thing to have to protect one child from the other like that but there isn’t much choice when his is in an angry trance. When he calms down he snaps out of it and he is very apologetic but the damage is done. Better me than my daughter.

So if you see me and ask why I don’t take him places in the summer…it’s just better that way.

One thought on “Traveling with an Autistic Child”