This is the last fruit I have to harvest this year…Thank Goodness!

I have no ambition this year. I went out and filled a 5 gallon bucket with crabapples off the tree, there are about a million more littering the ground but I only had the umph to do a little.

I washed and sorted the crabapples to remove leaves and other debris, then started removing stems and the rosettes from the bottom.

I put 4 quarts of chopped crabapples into a large jar added 3 cups of sugar and 1 tbsp cinnamon, then poured a bottle of Whipped Cream Vodka over the top. This will make Crabapple Liqueur that will taste like apple pie ala mode. I reduced the sugar this year from 4 cups to 3 because it is normally really sweet. I hope it will tone it down a little. This will have to sit for 16 days, then be strained and bottled. 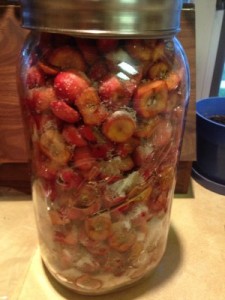 I cooked down the rest of the crabapples. In batches of 6 cups of water to 6 cups of fruit.  Brought to a boil then simmered for ages until the fruit was soft.

After cooking the crabapples, I strained off the juice.  You can puree and strain out more juice, but my apples were really dry this time so I didn’t bother.

After extracting the juice. I made two batches of jelly. One regular and one low sugar version (Made with Truvia Baking Blend) Follow the directions in the Sure Jell box 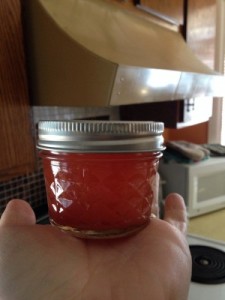 It separates slowly from the side of the jar.

If it doesn’t set, it will still be liquid and will slosh around in the jar.

You have two choices at this point.

One: reboil it with some more pectin and hope it sets.

Two: Say YAY! I made syrup!

I had one batch that set and one that didn’t. So I stuck with the syrup idea because Cinnamon Crabapple syrup on pancakes just sounded too good!