So the other day I came home from work and our entire street was blocked off. No warning just suddenly can’t go down the street. Then a backhoe and several work trucks showed up. They started digging.

It was kind of funny to watch four men standing around in the pouring rain talking to a hole. Every once and a while they would throw a huge wrench or something down in the hole.

Eventually tools started flying out of the hole like popcorn and this fellow with the yellow slicker emerged. They pulled a ten foot ladder out and started to fill the hole again.

It took three truck loads of dirt to fill it and in between each load the yellow slicker guy climbed down and shoveled and tamped it down. 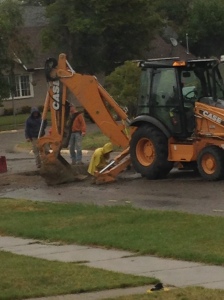 Pretty soon it was just the backhoe and the guy in the slicker. They had done the majority of the work by the way.

So now we have this…

A rather large hole filled with dirt. Never found out what they were doing. They never took pipes or anything down into the hole so who knows. At least it entertained my son for six hours.